A GUEST FOR DINNER

Around the time the Spaniards came in 1584 and long before they made the town of Ilog the first capital of Negros, there were settlements on its hills. Watered by the longest river in Negros, the hills were fertile—herbs, fruits, and wild animals to hunt in great abundance./1/

Among the tribes living there was a family headed by a man named Katagbak—so named because he was “of” or ka, tagbak, that is, born in a place near where the stout, herbaceous plants called "tagbak" were plentiful./2/

One day, Katagbak went deep into the forest to hunt as he was wont to do. Accompanied by his dog and armed with a spear, he followed the well-worn trail and settled to wait for prey at his favourite hunting ground. In no time, the man and his dog sensed a rustling sound behind the bushes not too far ahead. Katagbak threw his lance at the center of the foliage, and immediately heard the recognizable shrieks. Startled flocks of birds flew out and smaller animals scampered away. Katagbak had impaled a large boar.

Marching back to their settlement with their prize kill, Katagbak got his bamboo noise maker to alert the other members of the tribe on the upcoming festivity. Soon, neighbours and friends started to arrive, and together, they prepared for the feast.

As the celebration progressed, two of Katagbak’s daughters were tasked to gather wide leaves in the forest to be used as matting for the steamed rice and roasted boar meat. Whilst there, they spotted a young boy—about eight years old--swinging on vines and playing with branches of trees. He was completely naked. As soon as he saw the two sisters, he hid behind the tall bushes. When they approached, he ran. When they stopped, he stopped. When they pretended to turn around, he continued with his solitary activity. Through this repeated trick, they finally caught the boy between the two of them and through threat and cajolery, persuaded him to return with them to the settlement. The boy refused to utter a sound, so they named him Pinulot (foundling). 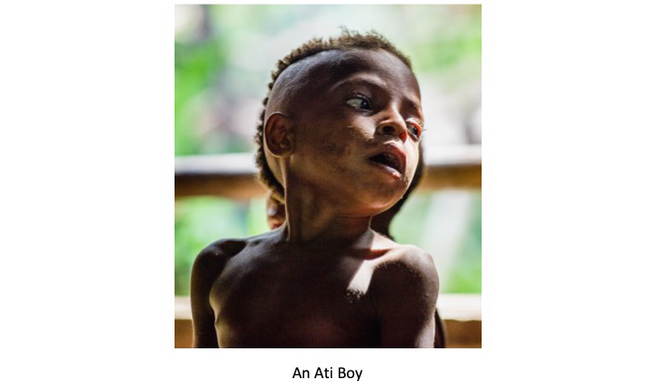 Inside their hut, the frightened Pinulot huddled in the corner, refusing the bahag (loincloth) they presented to him, declining their invitation to join in the festivities, and even ignoring the succulent piece of boar meat they offered him. The two sisters finally abandoned their efforts and proceeded to join the merriment outside, glancing from time to time at Pinulot who they noticed was peeking from behind one of the posts.

Katagbag’s hut was many sided. It was supported by a number of main posts narrowly spaced from each other. Each area was reserved for a particular function—cooking, eating, washing, sleeping, storing, etc.

As the revelry continued well into the night, Katagbak remembered Pinulot and he himself went inside the hut to coax his guest to join them. But Pinulot kept resisting, finally leaping away from Katagbak. This in turn caused the by-now irritated Katagbak to try to catch and grapple with him, impelling Pinulot to keep hopping from one post to the next in an effort to get away.

In time, Katagbak noticed that as Pinulot jumped from one pillar to the next, the pillar would sink into the ground, ever deeper with each stamp of Pinulot’s feet, until the previously dry surface turned into muddy ground. Before the eyes of the aghast Katagbak, the pillars were soon submerged until the whole hut collapsed and was completely sucked by the seeming quicksand.

Then, the sky opened, and heavy rains gushed, lighting flashed, and clapping thunder echoed throughout the hills. The revelers scattered in fear as huge streams of water spouted from beneath the ground to meet the splashes from the rain, first engulfing the area where Katagbak’s hut stood, then where the dancing and celebration took place.

When the tribesmen next returned to the site, they saw several large lake-like water holes. They named the two largest ones Daliku (where Katagbak’s hut once stood), and Nalandan (where the merry making was held). As for Katagbak himself, nobody saw him again.

Years passed, passers-by heard of the large water holes in the Ilog/Kabangkalan border and were entertained by the story of Katagbak and Pinulot. Eventually, although the water holes had since dried out leaving only indentations, the area became known as Tan-awan or viewing place. 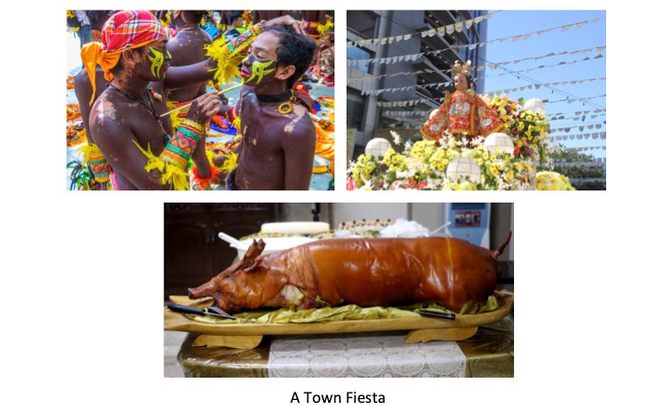 The ancient idea of celebrations and love of merry making have remained ingrained deep in the Filipino psyche.  Sharing and bonding rituals are practiced through communal revelry and partaking of good food in much the same way the Katagbak family had done.  But we should all remember how the story of Katagbak ended.

Now-a-days, fiestas are one of the most popular festivities in our calendar. Everyone looks forward to the feast day of the town's partron saint when they can join costumed events and go street dancing./3/ However, in their false sense of hospitality, many are losing sight of the fact that they should respect those members of their community who may not share the same enthusiasm, just as Katagbak and his two daughters should have respected the wishes of Pinulot.

Likewise, fiestas are celebrated with open houses—anyone can go in and share in the good food prepared by each household so that there is often social pressure on both hosts and guests. In their fear of running out of food or serving dishes that might be considered substandard, hosts would sometimes borrow money to offer delicacies to their walk-in guests, and the guests of these guests. On the other hand, the visitors are expected to enter the homes of everyone they know in the community and show pleasure in what are being served.

I remember as a young girl I attended a Catholic college, and our course in Religion involved going to the barrio next door to teach catechism. On their fiesta, our teacher-nun brought a number of us students to visit a few homes, greet the hosts, and partake of their meal. The objective was to bond with members of our catechism class.

In one house, we were served a casserole of dog meat, considered a delicacy. With a piercing look from the nun, I was forced to eat a  helping whilst thinking of my pet beagle Charlie.

Footnotes: /1/Ilog is a Tagalog word for “River”, the name suggested by the Tagalog guide of the Spaniards as they explored a place “completely surrounded by water.” It was made the first capital of Negros in the late 18th Century.  /2/Katagbak and his tribesmen were probably an Ati group found mostly in Negros and Panay and ethnically related to the other Negrito groups such as the Aeta in Luzon and the Agta in Mindanao. Small and dark-skinned with kinky hair, they are considered the aborigines of the Philippines. They came from Borneo some 25,000 years ago, pre-dating the arrival of other migrants such as the Bisaya, who arrived in boats called balangays. The Atis were then pushed farther and farther upland with the arrival of each succeeding migration. Currently numbering about 40,000, they have transited from nomadic to more settled communities, substituted T-shirts for their loincloths, and now maintain friendly relations with the lowlanders. /3/Philippine fiestas are celebrations typically in honour of the patron saint who is responsible for the good favours granted to the townsfolk. In larger communities, these festivals can last for as long as a week, when people come out in the streets to dance in carnival fashion and participate in various organised and costumed events.

What a nice tale; thanks!

Nice folk story that provides an insight into the aborigines that peopled our country eons ago but still exist today. The story was engaging.