BIRDS OF NEGROS (Part I) by Christian Perez

The western Visayas, consisting of the islands of Negros, Panay and Guimaras, form a separate biogeographic region that hosts a number of animal species that are endemic to the region (i. e. that are only found naturally in that region and nowhere else). The islands were connected by a land bridge and formed a single island during the Pleistocene epoch (2.5 million to 12,000 years ago), which resulted in the evolution of animal species independently from the rest of the archipelago. The range of some of those species includes Masbate, an island that must have been connected for part of the period. Let’s take a look at five of those endemic birds.

The Visayan Hornbill Penelopides panini is endemic to Negros, Panay and Masbate. It was first described and illustrated by Scottish ornithologist Viscount Walden, in the 1875 issue of Proceedings of the Zoological Society of London. It lives in forests in noisy groups, flying between treetops, rarely above the canopy. The call sounds like a toy trumpet. The species is considered endangered by the International Union for Conservation of Nature (IUCN), meaning that it has a high risk of extinction as a result of rapid population declines, mostly due to habitat loss. I observed a few Visayan Hornbill in the forests of Negros and Panay, where it is still locally fairly common. I photographed a male near Lake Balinsasayao in Sibulan, Negros Oriental in 2011. 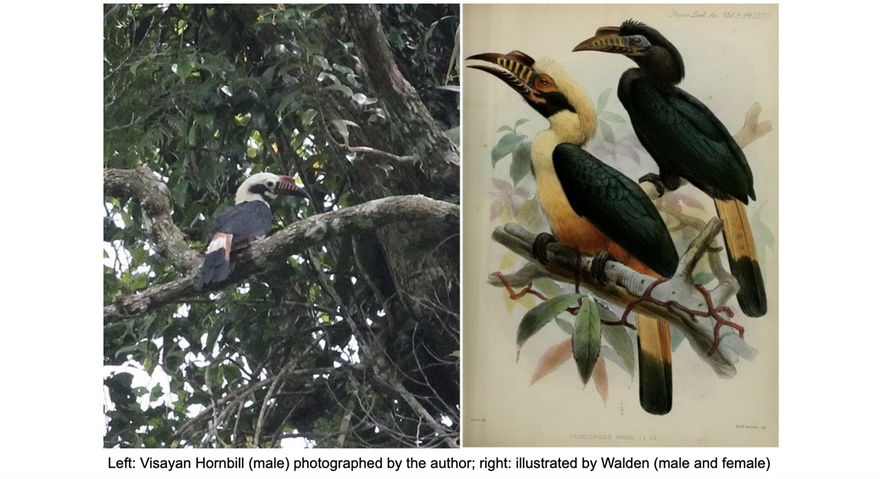 The Yellow-faced Flameback Chrysocolaptes xanthocephalus is endemic to Negros and Panay. It was first described and illustrated by Walden and Edgar Layard in the April 1872 issue of the periodical The Ibis. It lives in tall trees in primary and secondary forests. The species is also categorized as endangered by IUCN due to habitat loss. Is quite rare and difficult to find. I have never seen one although I heard the call in the forests north of Siaton in the south tip of Negros. 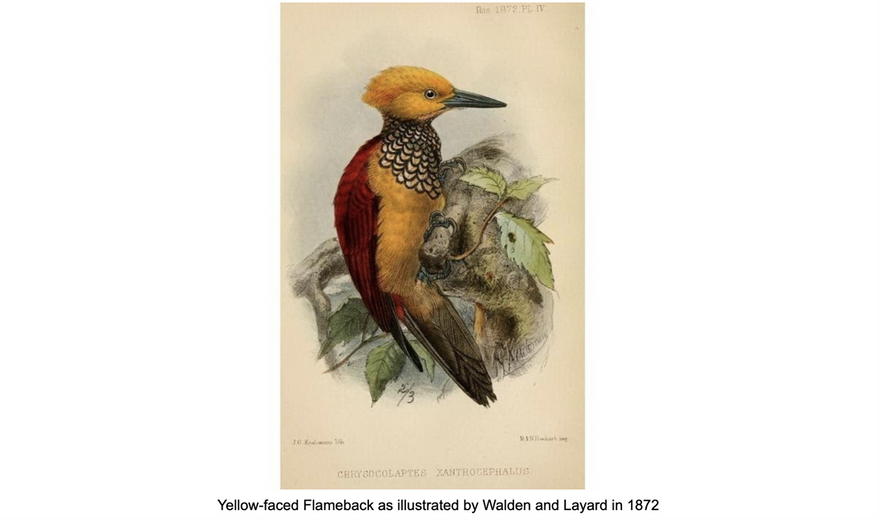 The Flame-templed Babbler Dasycrotapha speciosa is a pretty bird that is endemic to Negros and Panay that was described and illustrated by Walden in the 1878 issue of the Proceedings of the Zoological Society of London. It forages in small groups or mixed flocks in the understory of lowland forests. Although considered endangered by IUCN, it is fairly easy to find in the remaining forests of the islands. I photographed one in the Gawahon Ecopark in Victorias city, Negros Occidental. 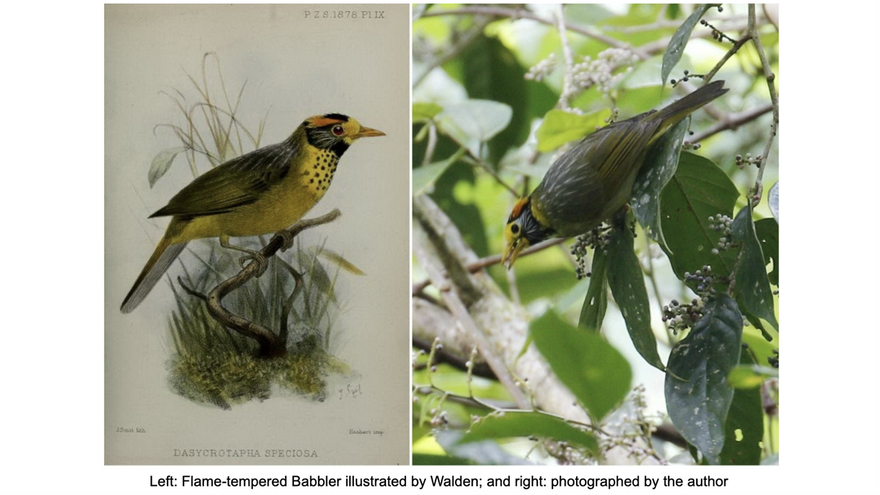 The Negros Bleeding-heart Gallicolumba keayi is endemic to Negros and Panay and was described, named and illustrated in 1900 by British ornithologist William Clarke in an article entitled On some birds of the island of Negros, in the magazine The Ibis. It is categorized as critically endangered by IUCN, which means that it is facing an extremely high risk of extinction in the wild. This is mainly due to hunting and poaching. It is a popular cage bird that has the dangerous reputation of tasting good. It is extremely difficult to observe in the wild. I have never seen one in spite of several attempts, in particular in the Northwest Panay Peninsula Natural Park.

Here is what Clarke wrote in 1900: “Notwithstanding the extremely unsettled state of affairs in the Philippine Archipelago, my friend Mr. W. A. Keay returned to his sugar-plantation on the east coast of the island of Negros in February 1899, and remained there for several months, as he has done for the past twenty years. […] It is somewhat remarkable that this species should have remained so long undetected, for Mr. Keay tells me that he has known it for nearly twenty years, and has on several occasions kept examples in cages as pets. Mr. Keay further informs me that the bird is fairly common in the woods, but comes regularly to the river to drink, and is then captured by the ‘boys’. The native name is ‘Penes’. It gives me great pleasure to name this beautiful Pigeon after Mr. Keay, as a small recognition of the services he has rendered to Philippine ornithology.” 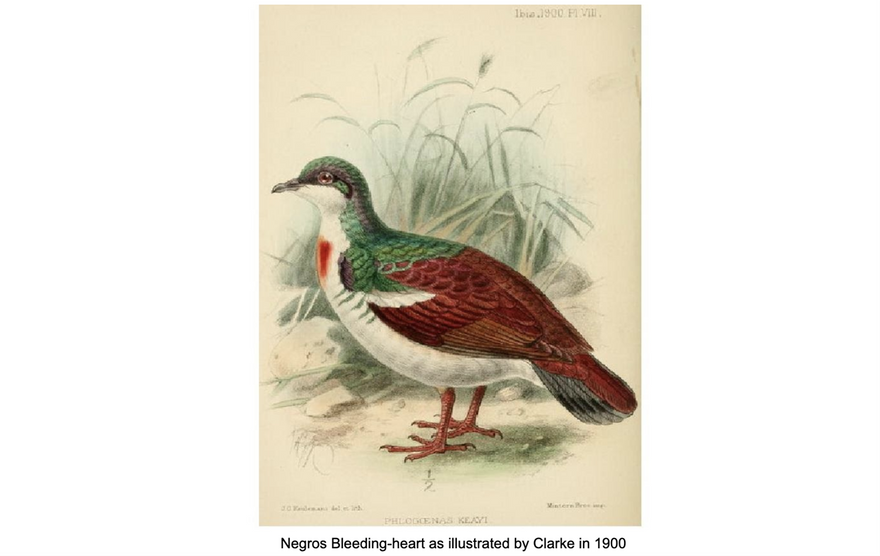 The Negros Scops Owl Otus nigrorum is endemic to Negros and Panay. It was first described in 1950 by a Canadian ornithologist from a specimen taken in Negros by prominent Filipino zoologist and conservationist Dioscoro Rabor. It is found in the understory of lowland and medium elevation forests. It is categorized as vulnerable by IUCN, mainly due to habitat loss. This means that it is likely to become endangered unless the circumstances that are threatening its survival and reproduction improve. They are not too difficult to find with the help of locals who know where they perch at night. I observed and photographed one in Valencia, Negros Oriental, just west of Dumaguete. 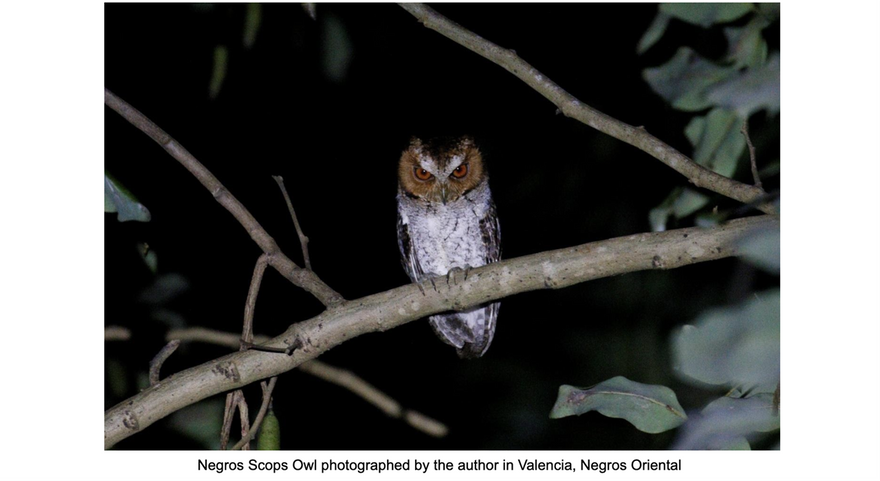 A few more bird species are endemic to the Negros/Panay biogeographic region: Walden’s Hornbill, Visayan Fantail, Maroon-naped Sunbird, Visayan Bulbul, White-throated Jungle Flycatcher, and Black-belted Flowerpecker. Furthermore, two species are endemic to Negros Island only: Negros Striped Babbler and Negros Fruit Dove. Another species, Negros Leaf-Warbler, is not endemic but is so named because it was first described in Negros. I propose that we take a look at those birds and their stories in a future article on the birds of Negros.

So nice, thanks to Christian and Vicky for this treat. Looking forward to the next installment