THE PHILIPPINES IS PERFECTIBLE by Kenneth S. Reyes

The Philippines has a multitude of problems: poverty, a “damaged culture”, weak institutions. But I believe that its share of ills is neither more nor less than any other country’s. Because societies are the spontaneous outcomes of countless uncoordinated decisions made by countless individuals, they often end up messy, illogical, and indeed, “broken”. Coupled with the psychological tendency to dwell on negatives, what emerges in conventional wisdom is a picture of a country that is always the worst its ever been, perpetually on the brink of failure. This is pure caricature.

My purpose in this essay is to rebalance the scales somewhat by pointing out reasons to be optimistic about the Philippines. I do not intend to go the other extreme and paint a Panglossian view of a best of all possible worlds. Rather, I wish to remind anyone who thinks about these things that the country is, has been, and always will be a work in progress, or, to borrow a term from moral philosophy, perfectible. That is, it is flawed, but capable of improvement.

Let’s begin by setting expectations. One must realize that economic development simply takes a long, long time. The Industrial Revolution has made it faster, but still, the kind of explosive growth seen in Japan, South Korea, and their like, where citizens went from poor to rich in two generations, remains the exception. The chart below shows how long it took selected countries to go from about the income level of Nigeria to about the income level of Portugal. At 30 years, South Korea was certainly precocious, though Japan’s 84 years is also impressive. More typical are the Western countries. The United States, the richest large country in the world today, took 189 years to go from poor to rich. Its colonial master the United Kingdom took longer—312 years. Yet this still pales compared to the Netherlands’ marathon 603 years. As can be gleaned from the chart, growth really only took off for all in the 19th century. Before that, it was centuries of plodding along in semi-poverty.

The Philippines reached Nigeria’s level of income around 1924 during the U.S.-enabled sugar boom. This crashed during the Japanese occupation. Since then, save for the crisis that followed the assassination of Ninoy Aquino in the 1980s, Philippine income has been on a steady rise, fueled by our services industries. While it is taking us longer than Korea and Japan to achieve rich-country status, we are already ahead of schedule compared to the United States and other Western countries. One must also keep in mind that the Philippines is a relatively young country. Our archipelagic geography has meant that governance has always leaned toward the local, and it wasn’t until we elected a Philippine Assembly in 1907 when politics became truly national. This is in contrast to Japan and Korea, who have hundreds if not thousands of years of experience as a unified body with a strong central government. Our economic development, then, has had to go hand-in-hand with our national development.

To reiterate, these things take time, but sooner or later, this train will arrive at its destination. If the wait seems unendurable, it might please you to look back and ponder the distance we have already covered. Poverty rates—the share of the population living on incomes below what can cover basic needs—have fallen significantly since the EDSA Revolution. The table below shows various published measures of the poverty rate over the years. While their methodologies differ, they all point to a steady decline, from almost half of the population in the 1980s to less than a fifth today. This even as the population has ballooned from 48 million in 1980 to 109 million in 2020. 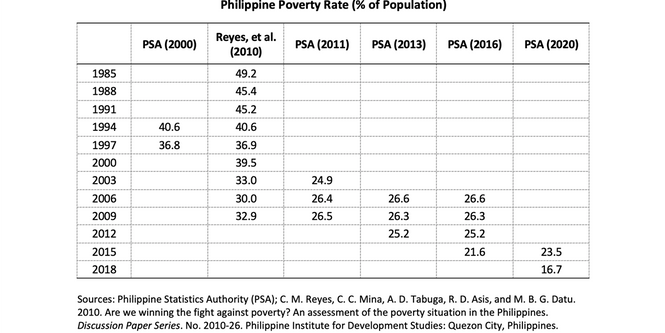 Crucial to this progress is the government’s conditional cash transfer program, pilot-tested by the Arroyo administration, institutionalized by the Aquino administration, and continued by the Duterte administration. In a fraught political landscape, it is wondrous that such an effective program has remained relatively uncontentious. And effective it is—many studies from around the world have shown that such programs nudge beneficiaries toward remaining in school and taking better care of their health, all while directly infusing the needy with a little extra cash. This investment in one’s citizens is a proven systemic fighter of poverty.

The conditional cash transfer program is just one among many examples of things the government has gotten right. Yes the Philippine government, the laziest, most corrupt, most incompetent government in the history of the world (as the thinking class conceives of it), gets things right from time to time. I can still remember the rolling blackouts of the 1990s that everyone was expected to put up with. Now the power industry reforms of 2001 have made blackouts that last a fraction of the time bait for a full-blown senate inquiry. My childhood home had a private pump that drew water from underground, installed at my family’s expense because the public utility was too unreliable. Now water access, at least in the cities, is universal, thanks to its partial privatization. In 1992, Lee Kuan Yew was able to joke that ninety-nine percent of Filipinos are waiting for a telephone and the other one percent for a dial tone. Now one can purchase a subscription and get a phone, a dial tone, and high-speed Internet the following day. And whereas air travel used to be a tightly regulated monopoly, competition can now sometimes drive prices down to one peso. The list goes on.

These highlight the lopsided way we pay attention to failures: deeply frustrating when present, but quickly slips out of our minds when absent. As we gnash our teeth at the problems we see around us, it pays to reflect too on the list of things we need not worry about, things like hyperinflation, speculative attacks on our currency, unsustainable public debt, balance of payments crises, stock market bubbles. Our macroeconomic environment is fairly secure because silently and without fuss, our monetary and financial authorities have been doing their jobs. Another concern we need not worry about is a rogue Philippine army, which has gone from launching multiple coups against the first Aquino administration to being a thoroughly professionalized institution. One cause for hope that dictatorship will never return to this country is that the army has very little interest in politics, something that cannot be said for many of our Southeast Asian neighbors.

To raise these achievements is not to encourage complacency. It does, however, combat its opposite: cynicism. It is easier for us to shirk our duty to contribute when we can claim that nothing we do will ever make a difference, that things are far too hopeless. They are not. Progress has happened; in fact, it happens all the time. Take this trunk, this ear, this tail, and this tusk—take the good and the bad, the advances and the setbacks—and see the entire elephant for what it is.

Development does indeed take a long time. Comparisons ASEAN countries would likely raise governance and corruption issues as reasons why PHI did not do better relative to ASEAN neighbours.

Hi Kenneth, well written. How to fix governance, which should be transparent and reliable ? If that would come to any country, in my view, prosperity and well-being will increase.