The first installment of this series on the birds of Negros was published on 12 September 2020. It presented five bird species that are endemic to Negros and Panay: Visayan Hornbill, Yellow- faced Flameback, Flame-templed Babbler, Negros Bleeding-heart and Negros Scops Owl. I explained that Negros and Panay were connected by a land bridge and formed a single island during the period from 2.5 million to 12,000 years ago, which resulted in the evolution of some bird species independently from the rest of the archipelago. This second installment presents a few more bird species endemic to the two islands.

The Black-belted Flowerpecker Dicaeum haematostictum, also called Visayan Flowerpecker, is a small bird that was first described in 1877 by English ornithologist Richard Sharpe in the Transactions of the Linnean Society of London. It is commonly seen in fruiting and flowering trees in forests, open country, plantations and gardens. I photographed one in a farm in Bakong, Negros Oriental, a few kilometers west of Dumaguete.

The Marron-naped Sunbird Aethopyga guimarasensis is a common endemic resident of Negros, Panay and Guimaras (as its scientific name implies). It was first described in 1890 by American ornithologist Joseph Steere. It is only 9.5 cm long from bill to tail and is mostly seen in forests and edges from low to high elevations. I photographed one in the Balinsasayao Twin Lakes Natural Park in Sibulan, Negros Oriental, north of Dumaguete.

The Walden's Hornbill Aceros waldeni, locally called dulungan, is also endemic to Negros and Panay. It is considered critically endangered by the International Union for Conservation of Nature (IUCN), the highest level of threat. It is facing an extremely high risk of extinction in the wild due to poaching and habitat loss. The bird is difficult to find in Negros where it is possibly extinct, and can only reliably be observed in the wild in a few higher elevation areas of the Central Panay Mountain Range where fewer than 600 pairs remain. It was first described in 1877 by English ornithologist Richard Sharpe and was named after Scottish ornithologist Viscount Walden. Unfortunately, I have only seen that bird in captivity, including once in a remote barangay in Panay ready for the pet trade.

The Negros Fruit Dove Ptilinopus arcanus is a bit of a mystery bird. A pair was shot in 1953 by prominent Filipino zoologist and conservationist Dioscoro Rabor on the slopes of Mount Kanlaon at an elevation of about 1,100 meters. Only a female was recovered, and the species is only known from that specimen, the skin of which is preserved in the Yale University's Peabody Museum of Natural History in the US. There has been no other sighting. It is presumed to be extinct or extremely rare. It is suspected that the species originally lived in the lowlands and was driven to higher elevations by habitat destruction.

The Negros Striped Babbler Zosterornis nigrorum is a rare and endangered Negros endemic bird that is found in forests and dense bushes at elevations higher than 1000 meters. Even if present, it is almost always in movement and difficult to observe and even more difficult to photograph. I saw the bird once after a hard hike on the slopes on Mount Talinis near Dumaguete but was unable to take a picture. It was first described and named in 1950 by Dioscoro Rabor and Canadian ornithologist Austin Rand.

The Visayan Fantail Rhipidura albiventris, another Negros-Panay endemic, is locally common in lowland forested areas. Its name derives from its habit of cocking and fanning its tail while foraging. The species was first described by Richard Sharpe in 1877. I have seen the bird on the slopes of Mount Talinis near Dumaguete and in Gawahon Eco Park in Victorias, Negros Occidental, where I took the picture below. 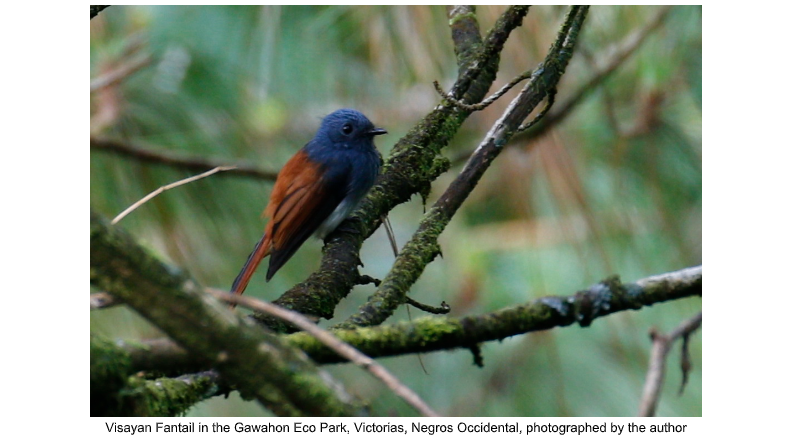 To be complete I am showing pictures of the following species which are also endemic to Negros and Panay: Visayan Bulbul, White-throated Jungle Flycatcher and Visayan Shama.

The Negros Leaf-Warbler Phylloscopus nigrorum is a Philippine endemic and a fairly common resident of the mountains of Luzon, Mindanao, Palawan, Panay and of course Negros. The bird was first described and named by British naturalist Henry Moseley in 1891 from a specimen obtained from Negros. The scientific species name nigrorum meaning “from Negros” reflects the original discovery, but the English name is not consistent with the actual geographical range of the species. 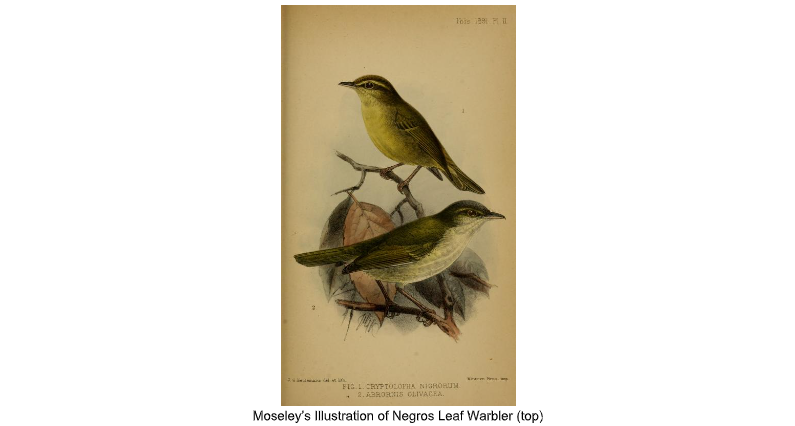 We have focused on species that are endemic to Negros and Panay, but the islands host many more species with a wider geographical range. Some of them are resident of the Philippines and Southeast Asia, while others are migratory species that breed in northeast Asia during the northern summer and spend the winter in the Philippines or fly through on their way further south. The mudflats of Barangay Tibsoc in San Enrique, Negros Occidental, are a major stop for migrants along what is called the East Asia Flyway, and one of the best sites in the country to observe migratory birds such as gulls, terns, plovers, sandpipers, ducks, herons and many others. The migratory birds of Tibsoc will be the subject of a future article on the birds of Negros.

Where can we ask for pictures for negros birds. u have 5 hectare endemic forest planted from bird and bat feces.plan to develop into bird sanctuary and food forest .need info so I can document animal

Hello Romeo. You can find lists of birds of Negros on Google (example http://www.exoticbirding.com/philippines/negros/checklist.html). You can Google each bird to find many pictures and other info.