The Island of Luzon was once home to the Sarus Crane (Grus Antigone), the world’s tallest flying bird. Its height is typically from 115 to 167 cm and its wingspan 220 to 250 cm, but the height can reach up to 180 cm in some individuals. The species ranges from northern India to Southeast Asia and northern Australia. The Sarus Crane was first formally described and named by Carl Linnaeus in 1758 from an India specimen. The Philippine birds belong to the Southeast Asia subspecies sharpii which was formally described in 1895. The other subspecies are antigone in India and gillae in Australia. 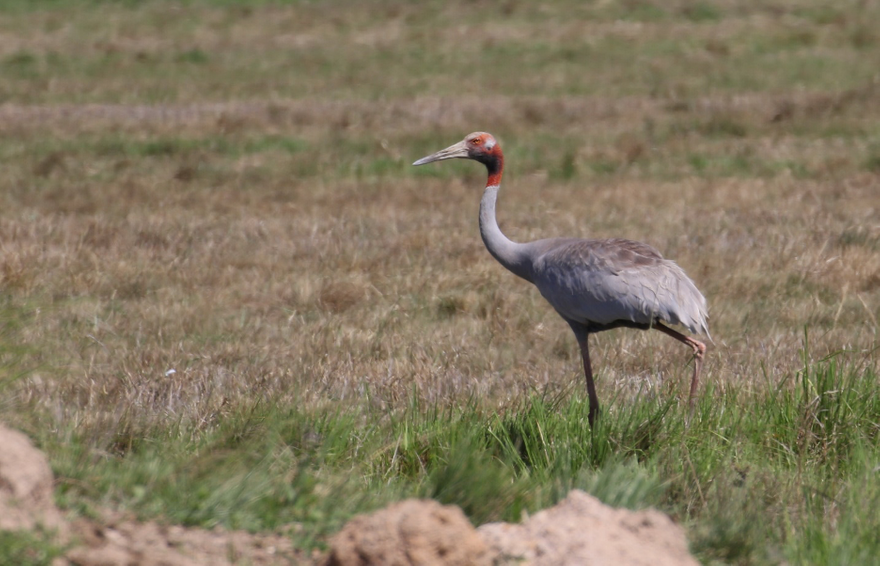 Georg Camel mentioned a Philippine crane in 1702 in an article submitted to the Philosophical Transactions of the Royal Society in London, with the following words, as translated from Latin: “Crane. Grulla in Spanish. Tipul or Tibol in Luzon. Three cubits high. With the neck, higher than a man”. A cubit (or elbow) was a unit a measure of about 44 to 52 cm. Georg Joseph Camel (b. 1661 in Brno – d. 1706 in Manila) was a Czech Jesuit missionary and botanist. He became a Jesuit in 1682 and was sent to the Philippines in 1688. He established a pharmacy in Manila, the first in the country, where poor people were supplied with remedies for free. The flower genus Camellia was named after him. 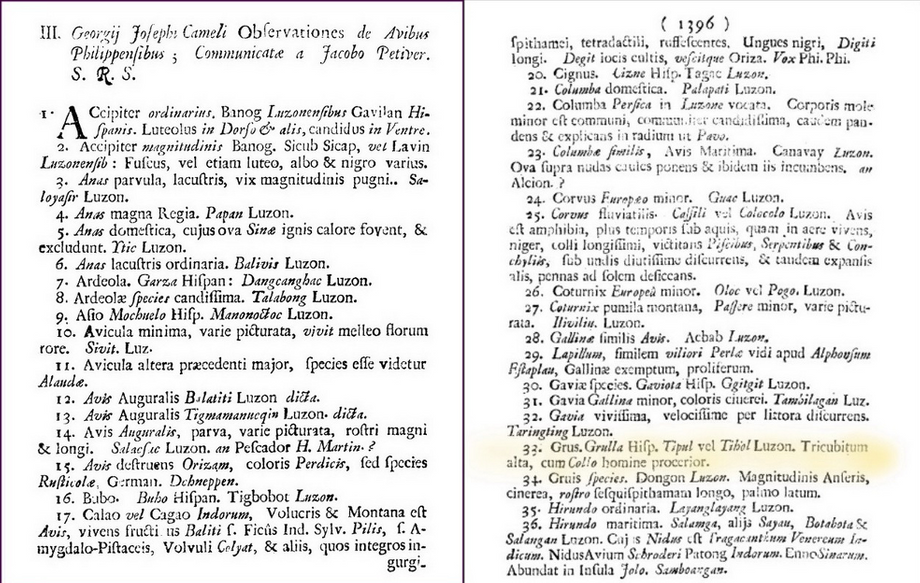 Page 1 and 3 of Camel’s submission to the Royal Society, with the Sarus Crane entry highlighted

A few years ago, I acquired the book Old Manila by Carlos Quirino and was fascinated by one of the illustrations: a watercolor painted in 1847 by Filipino painter Jose Honorato Lozano (ca. 1815-1885), known for his paintings of people and costumes and considered one of the best Filipino watercolorists of the 19th century. The painting is entitled “Indio Vestido de Anajao” (Filipino Wearing an Anahaw Coat) and shows a Sarus Crane, a bird that was still abundant in Luzon in the 19th century. The illustration shows the bill of the standing bird reaching the shoulders of the man. 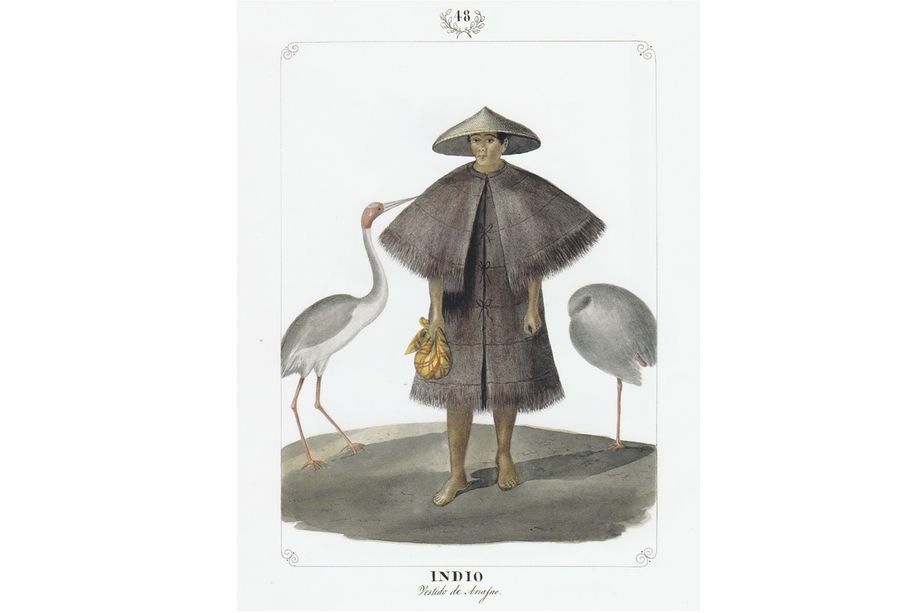 American ornithologist Richard McGregor reported in 1909 that the Sarus Crane was “abundant in the vicinity of Cabanatuan, Nueva Ecija”. He added that the species had been reported from the Candaba Swamp. Mc Gregor wrote: “I saw Antigone sharpei in large numbers in Cagayan and Isabela during my recent trip, 1906, through those provinces. I am informed that these birds nest on the ground in May, contenting themselves with scraping together and flattening down a little grass on which to deposit their eggs. About August they lose their long wing-feathers and when in this condition can rise but a few feet from the ground. The people of Isabela then pursue them on horseback and take them with lassos, although according to the statements of the hunters the birds, aided by their wings, run about as fast as deer.” It is easy to see how these practices were to drive the Luzon population to extinction.

Japanese zoologist Masauji Hachisuka formally described the Sarus Crane from Luzon in 1941 as a separate endemic subspecies luzonica, but he was not followed by other authors. Jean Delacour and Ernst Mayr called the subspecies Eastern Sarus Crane and stated in 1946: “It is the only crane recorded from the Philippines. Found only in Luzon, where it is resident, and breeds in the Nueva Ecija Province in open swampy country; seen also in central and northern Luzon.” Delacour and Mayr never came to the Philippines, and it is not clear whether they had recent information on the presence of the birds or relied on old data. American ornithologist John Dupont mentions in 1971: “Range: Northern and central Luzon.” Although Dupont travelled extensively throughout the Philippines, the source of his information is not mentioned, and it is not clear whether he actually saw the bird.

American Peace Corps volunteer Karen Madsen conducted a search for the crane in Luzon from June to December 1979 and published a paper in 1981 about her findings. The search areas covered were Cagayan Valley, Kalinga-Apayao (then not yet split), and Candaba Swamp in Pampanga. I quote from the paper: “Information concerning sightings was gathered directly from local people. In Isabela people reported having seen Eastern Sarus Crane in the early to mid-1960s, but not since then. People in Tabuk claim that the crane was abundant in the early 1940s but their population quickly declined when the human population increased. In the early 1970s only two sightings were reported. In 1979 a crane pair was reported seen flying regularly over Tabuk but I failed to find them. The crane’s flat, swampy habitat is suitable for rice cultivation. Farmers on Luzon continue to destroy crane habitat while preparing wetland for rice cultivation. Without the tall grass cover of the original crane habitat, hunters have easily decimated the crane population.”

In six months of research Madsen did not see a single crane. Sighting reports by local farmers are notoriously unreliable as the locals tend to tell visitors what they want to hear. It is very likely that the Sarus Crane population had been extirpated from the Philippines by the late 1970s, and possibly earlier. Present day birdwatchers know that it is impossible to imagine that the Sarus Crane might still be hiding somewhere in Luzon.

While extirpated from Luzon the Sarus Crane is not extinct: it can still be seen in India, continental Southeast Asia and Australia. It is considered “vulnerable” by the International Union for the Conservation of Nature. I was lucky to see and photograph a few Sarus Crane during a birdwatching trip to Australia in 2018.

The first probable description of the Sarus crane would have been Alcina's in 1668. Entered as "Thol" possibly a mispelling of "Tihol" wherein, he described it as a crane larger than the herons.

It is sad that there are birds like Sarus Crane that has become extinct. I can hear birds chirping loudly at White Plains, QC at the beginning of the Covid lockdown. I do not hear again the chirping.

I learn something new everyday from all of you. Interesting, thanks for sharing.